Here's a review of my book, A House of Men. Thanks to the famous Western writer/Songwriter, Jim Jones for taking time to review the book. 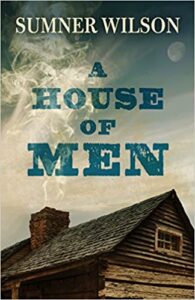 A House of Men by Sumner Wilson
Words matter and Sumner Wilson clearly gets that. In his novel, A House of Men, a tale of family conflict that spans generations, he uses words masterfully to paint pictures of the landscape, to set the mood and tone, and to bring his characters to life. I found myself re-reading passages just to savor the unique and almost poetic phrases. Emotionally, this is not an easy book to read but it’s a hard book to put down. The conflict centers on the two main characters, Steel Fixx and his cousin, Honus Rust. They were close in their youth but they began a feud that lasted a life time and entrapped family and friends on both sides in a fight to the death. Wilson avoids cliché, feel-good plot devices so if you’re looking for a “happy ending,” this may not be the book for you. Characters don’t always do what you want them to do. The “good guys” aren’t always good and Wilson develops the less sympathetic characters in ways that help you understand and empathize with their motivations even if you don’t approve of their actions. If you want a layered, complex tale that rings true about the complex nature of humans and keeps you engaged from beginning to end, you will love A House of Men.


Posted by sumner_wilson at 5:50 PM No comments:

The FBI painted him as a Communist. He said no, I'm not a Communist, I'm a Commonist, I'm for the common man.
Woody's guitar fought Fascists all during the dirty-thirties. His most well-known song was, "This Land is Your Land." Back then if you were outta work and lookin' for a job you were a no-good bum and a socialist. No matter how many great songs he wrote he never rid himself of the Communist label the rich and powerful tagged him with. The rich are still fighting him and his beliefs today. The men and women who fought in the Second World War were all Fascists-fighters. All the old-head union men who happen to still be living were Fascist fighters too. By the way, for those who don't know what the definition of Fascism is, it is: All power to the rich and corporations.
Today the Woody Guthrie spirit is called Antifa. The Reds have labeled Antifa as a terrorist group even though they are not even a group. Madison Avenue was hired by the Reds to come up with a title to put on them so it would be easier to demonize those who fight for the rights of the common man. Anitifa is their brainchild.The rich corporate folks, Fascists in other words, try and try to denigrate them but they are more of a symbol for equality and fairness than for anything else. That spirit will never die as long as there is injustice in the world.The same thing that keeps the story of Christ still going is this same enthusiasm for equality. It is the very thing that moves people like Woody Guthrie to stand up and fight back.
Posted by sumner_wilson at 2:33 PM No comments:

I'm a young man, living in an old man's body.

sumner_wilson
I'm a young man. I once was. No longer.